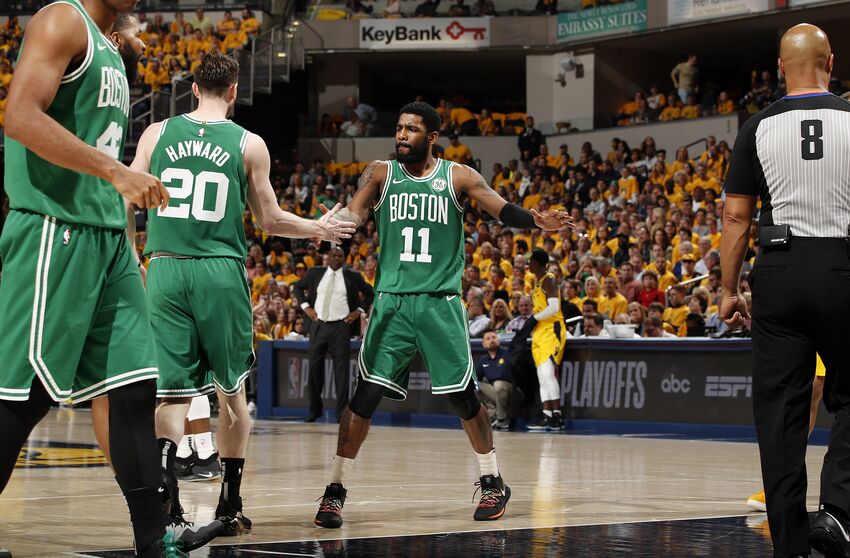 INDIANAPOLIS, IN – APRIL 21: Kyrie Irving #11, and Gordon Hayward #20 of the Boston Celtics hi-five each other during Game Four of Round One of the 2019 NBA Playoffs against the Indiana Pacers on April 21, 2019 at Bankers Life Fieldhouse in Indianapolis, Indiana. NOTE TO USER: User expressly acknowledges and agrees that, by downloading and or using this photograph, User is consenting to the terms and conditions of the Getty Images License Agreement. Mandatory Copyright Notice: Copyright 2019 NBAE (Photo by Jeff Haynes/NBAE via Getty Images)

Cody vs. Dustin Rhodes set for AEW Double or Nothing; Dustin says goodbye to Goldust by Andrea Hangst

The Pacers put up a fight but it wasn’t enough to take a game. The Celtics won Game 4 and completed their first-round sweep.

The Pacers had plenty of things go right for them in Game 4. They forced (goaded?) Al Horford into taking 19 shots, six more than any other Celtics. Horford and Irving combined to shoot just 8-of-32 percent from the field. They forced 15 turnovers and secured 11 offensive rebounds. But it wasn’t enough.

A huge performance from the Celtics bench was enough to overcome everything Indiana could muster and Boston was able to complete the first-round sweep.

Marcus Morris and Gordon Hayward made some shots. With Jaylen Brown stepping into the starting lineup in place of the injured Marcus Smart, the scoring and playmaking prowess of Morris and Hayward became the primary offensive foundations of bench-heavy units. Lineups with both on the floor had been outscoring Indiana by a healthy margin in the series, but scoring at an abysmal rate of 95.4 points per 100 possessions. Through the first three games of the series, the duo had combined to average 20.0 points and 2.4 assists per game, hitting just 6-of-22 3-pointers. In Game 4, they combined for 38 points, 11 rebounds and 2 assists, hitting 5-of-7 3-pointers. In a hypothetical matchup against the Bucks in the next round, Boston will need their depth to be productive. It was nice to TK the series with their primary bench scorers playing so well.

The Pacers frontcourt logjam has only gotten more tangled. With Victor Oladipo out of the lineup, you could argue that the Pacers’ two best players are Myles Turner and Domantas Sabonis — both centers who contribute in entirely different ways. The Pacers have, at times, tried to get the most out of this combination by keeping both on the floor at the same time, counting on their differences to make the combination work. During the regular season, the Pacers played the bigs together for about 10.7 percent of their minutes. They outscored opponents by an average of 3.1 points per 100 possessions in those minutes but mostly because of exceptional defense — the team scored just 99.6 points per 100 possessions when they were in the game together. In the first three games of this series, the Pacers used both bigs for about 17 percent of their minutes and were absolutely pummeled, scoring just 74 points per 100 possessions and getting outscored by 34.0 points per 100 possessions. The lineup didn’t offer the Pacers much of an advantage in Game 4 and moving forward Indiana will have to figure out which version of themselves they’d like to commit to long term.

Is Boston ready for Milwaukee? The Celtics finished their sweep today. In all likelihood, the Bucks will do the same on Monday night, leaving us at least a few days for hype to build before this series begin. Boston’s defense looks like it’s in top form but they also seemed to have been challenged much more by Indiana than Milwaukee has been by Detroit. Of course, we’re talking about a sweep (and a presumed sweep) so maybe it’s all relative. Still, we’re heading for an incredible second-round matchup.